q/a : the heavy comes to ‘mess with your minds’ 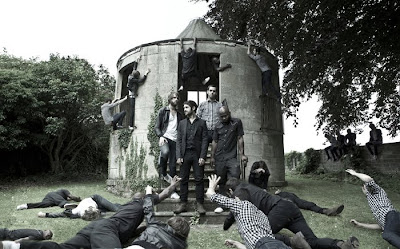 The Heavy are exactly that. Dirty, gritty, raw bluesy rock from Noid, UK, a tiny village in the back country southwest of Bath. Core members guitarist Dan Taylor and vocalist Kelvin Swaby have been making music together for almost two decades, and the current lineup, including drummer Chris Ellul and bassist Spencer Page, released their second album, The House That Dirt Built, in late 2009.

Mixing unrefined American styles, The Heavy creates a feral concoction that pulls from soul, garage rock (“Oh No! Not You Again!” featuring The Noisettes frontwoman Shingai Shoniwa), blues, reggae (“Cause For Alarm”), funk, and hip-hop (“Girl”). From the The Sonics to Parliament to James Brown, The Heavy have taken the best and rebuilt it into their own dirty house.

Their hit single “How You Like Me Now?” may have sampled the song “Let A Woman Be A Woman” (originally written by Dyke & the Blazers) but the following cut, “Sixteen,” does not sample Screamin’ Jay Hawkins’ “I Put A Spell On You”–rather it reassembles the classic’s nucleus with a Heavy twist and the hedonistically impure rhyme: “Now what the devil want, believe the devil gonna get, he gonna stretch her out, like a tape in a cassette.”

With the vintage crunch of a scratched 45, The Heavy are real–a Black Keys that’s added horns and an emcee on the mic. Howling and growling, Swaby draws inspiration from Curtis Mayfield, Prince and Al Green while his coarse lyrics defile your body, leaving you feel grubby immersed in their glorious groove.

Email ThisBlogThis!Share to TwitterShare to FacebookShare to Pinterest
Labels: crystal ballroom, sharon jones and the dap-kings, the heavy