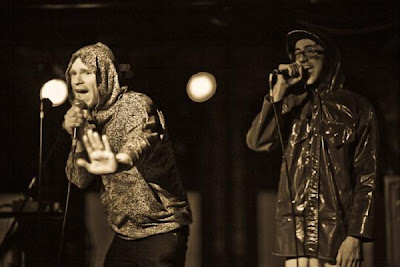 Serious Business is getting slightly more serious. Serious about recording an album. Serious about making music videos. And serious about guerilla performances… coming to an alley near you this summer!

The dippy electro-party rap group began a year and half ago as a duo with Danny Diana-Peebles contributing half of the vocals and Jason Mampel providing the other half along with programming electronics and modeling Mickey Mouse attire.

The duo wrote their first track “Freezer Burn” together and soon developed a reputation for silly, entertaining energy in their live performances. Many a concertgoer has left a SB gig shaking his or her head and declaring, “Now that’s my kinda stupid.”

With themes ranging from homoeroticism to sweet treats, the two vocalists work back and forth with their rap conversations where the humorously lewd lyrics build off one another to a sampled synth bumping climax.