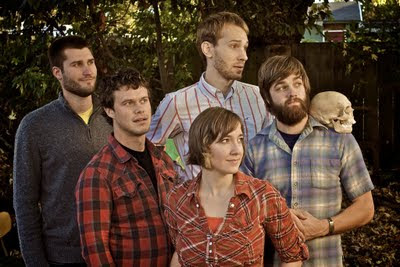 Oregon loves it's folk, roots, americana... whatever you wanna call it. And now a new generation is embracing some sort of blended indie folk that combines strings and foot stomping with banjos and pow-wows and is sooo poppy you'll jiggle and smile inside and out.

This brand is not better typified than Boston-to-PDX transplants The Ascetic Junkies. Mixing vocals from Kali Giaritta and Matt Harmon make for a melodic hootenanny tingling with folk country and bouncing indie.

Obviously literary nuts, The Junkies took their name from a group of misfits in a Kerouac novel and after moving to Portland in 2008, they broke onto the scene with their self-produced and released debut One Shoe Over the Cuckoo's Nest.

A little older, a little wiser, and a little more mixed-up musically, The Junkies release a glorious new four-track EP, Don't Wait For the Rescue Squad, this Friday at Backspace and everyone who attends gets a free copy of the album.

The band says this: "In an attempt to avoid wasting plastic that we assume you won't use for anything other than ripping the album onto your computer, we're just going to bring a laptop with us that you can feel free to plug your iPod/flash drive/CD-R/etc. into at any point during the show to steal the EP. Or if you want to sign your email address on a piece of paper, we'll email it to you when we get home that night."

So come kick it up and swing around to some pop/bluegrass/folk/indie rock with The Junkies.

---
Read this article on The Deli Portland.
Posted by pdxnoise at 09:35

Email ThisBlogThis!Share to TwitterShare to FacebookShare to Pinterest
Labels: backspace, the ascetic junkies, the deli magazine