'making it up' : the blow's first new record in 7 years 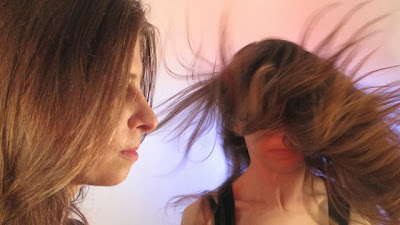 If you caught one of The Blow's back-to-back PICA performances at TBA:13 last month, you may have wandered out of the Winningstad Theatre feeling a little bewildered. In a word, the performance was odd—and not in the intriguing, thought-provoking way that the Time-Based Art Festival often strives for.

Although the excitement was palpable as Portlanders gathered on a Sunday night to catch The Blow's first performance in their former hometown in more than two and a half years, the extensive and sometimes awkward monologues—for which The Blow's Khaela Maricich is known—were too long and too out there. It was soon clear that there was no distinguishable storyline, and the cohesive thread that somehow manages to tie everything together in a Blow performance was lacking. In short, the performance was punctuated by long pauses rather than catchy electro-pop.

And, it was that electro-pop that the audience so craved, seeing as The Blow was set to release their first album in seven years on October 1st. Although these initial Portland performances left the audience feeling a bit unsatisfied, the truth is that The Blow is much loved in this town. So, an empty appetite also leaves Portlanders desirous for more, craving a decidedly different, and hopefully more musical, show at the Doug Fir Lounge on Sunday, October 20th.

Now, in The Blow's defense, Maricich did tell OMN prior to their PICA performance:


Performing at the Winningstad is the chance to do something unique because it’s like a lovely little nest of a theater. It’s sort of the opportunity to make an “unplugged” performance, since there is a sense of space and reflectiveness there, which is distinct from the amped up vibe of a sweaty music club. We are looking forward to revealing ourselves in the delicate environment there.

But post-PICA, Portland's expectant of the “sweaty music club” experience. That said, the handful of tracks The Blow did reveal at the Winningstad sounded spectacular—we, maybe selfishly, just wanted more.

And of those revealed, Maricich, alongside partner and collaborator Melissa Dyne, blasted a taste of their self-titled effort in the form of the record's first single, "Make It Up"—a love song that talks about breaking the rules, which seems to be a bit of a mantra for The Blow in general. Whether making lo-fi, electro-pop songs or presenting the band's narrative style of performance, does The Blow sometimes feel like they're making it all up as they go along?

"Yep," is the succinct response from Maricich.

Going "hand in hand into the blackness... making this album was an odyssey of experimentation," Maricich says. (The first part is also a lyric from the album closer "You're My Light.") In their official press release on the album, she continues:


We divided the tasks of making the album between us pretty much according the the differences in how we dream at night. Khaela dreams about people and conversations and juxtaposed feelings: She wrote the lyrics and melodies and many of the compositions. Melissa dreams of being a beam of light bouncing off a Ferrari: Anything that gave the songs dimension (arrangement, engineering, synth programming, sample perfecting, half of the composing) was done by her.

OMN already explored a bit of what it's like to go "into the blackness" before The Blow's PICA performance, and now Khaela Maricich continues the conversation about her collaboration with Dyne on The Blow's new record.