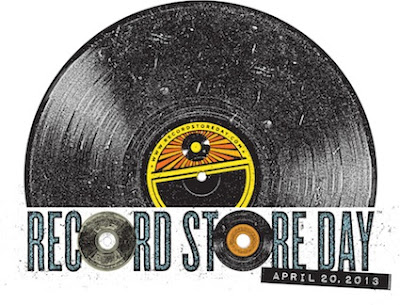 To celebrate some 400 limited edition titles available at thousands of indie record stores across the world today, I wrote up a few pieces on Portland happenings related to Record Store Day 2013.

In case you don't know, Record Store Day is when:

Record collectors rejoice! Your national (and fast-becoming international) holiday is upon us again: Record Store Day—the day when thousands of independent music retailers across the U.S. offer an incredible selection—literally hundreds—of exclusive limited edition releases that are only available at indie record stores. The focus skews heavily towards vinyl including special collaborations, colored and picture discs, reissues, rare boxed sets, and other one-time-only anomalies, which come in seven, 10 and 12-inch varieties. Each indie record shop often has a different assortment of musical goodies, as well as freebies and activities planned (like in-store performances, DJ sets by local musicians, and record signings), so check with your neighborhood digs to see what they have planned. There’s more than a dozen participating locales in Portland, so get started early before all the hottest commodities are gone!

And get even more info on all of the above at Oregon Music News, including a few special snoochie boochies specifically designed for four-twenty.
Posted by pdxnoise at 08:30