who’s the best dancer? get on the dance floor with hot chip 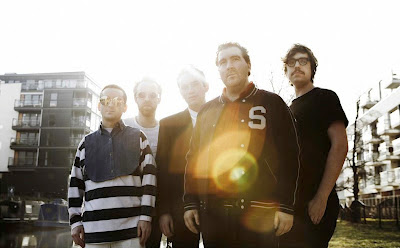 When Hot Chip arrive in Portland on Thursday, September 13th, the London seven-piece will have just headlined the Hollywood Bowl—an amphitheater with a capacity of some 18,000—with Passion Pit. But it's not their first time taking that grand LA stage—they co-headlined it a pair of years ago with LCD Soundsystem.

More than a decade in the making, Hot Chip multi-instrumentalist Owen Clarke is humble when he says, "We've been lucky in that we've been able to build up to this, and we feel really happy with where we are right now."

Recognizing the hard work they've put in over the years, Clarke recalls the "good education" that all the early years of support tours provided, giving the act a chance to "hit our stride" and "make our live mistakes on the small stage."

That slow build up is also perfected musically on the band's fifth and latest record In Our Heads with tracks like "Motion Sickness," "Flutes" and "Ends Of The Earth" where instrumental minutes pass and layer upon layer of percussion is meticulously, but flawlessly, balanced atop synth flourishes until the communal vocals of Alexis Taylor and Joe Goddard kick in, offering yet another indelibly repetitive layer that revolves around the implausibly danceable core.

"We've always occupied a space between the dance floor and the home, and we always try and make records that work in both places—[ones that] sound good on headphones or sound good on great, big sound systems," explains Clarke who plays guitar, bass, synths, and percussion with Hot Chip (and claims to be the best dancer in the band—but more on that later).

While the band may pay close attention to all the little details, they didn't necessarily set out with the aim of making a dance floor record with In Our Heads.

"We try making a synthesis of different things we enjoy," Clarke says, and that fusion has produced a happy record—one that's upbeat, joyous and alive, as well as romantic and constantly seeking unabashed human connection—possibly the thoughts In Our Heads that we rarely express without inhibition. And being romantically inclined, tension is also expressed, although always under the guise of danceable pop music (and sometimes alongside a few geeky samples).

Listen to "Don't Deny Your Heart":