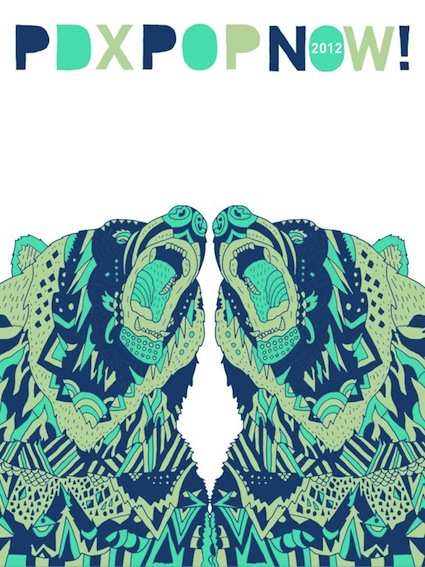 In just one short week, the ninth annual free, all-ages PDX Pop Now! festival will be once again hosted at Refuge from Friday, July 20th through Sunday the 22nd.

Now, there's a lot that could be said about each and every one of the 45 acts at that'll be taking the two stages at this year's PDX Pop Now!, but frankly, our time is as precious as yours. Plus, there's a convenient new splash page on the PPN! site that includes nifty little bios written fresh for the fest!

So, in the interest of time, we've copied and pasted the full lineup below, and now we'll attempt to provide you with OMN's top 5 picks for PDX Pop Now! 2012... the top 5 for each day of course:

If you show up to this weekend's Mississippi Ave Street Fair, you can get a preview of the two acts that'll be kicking off PPN! 2012. And in the true eclectic spirit of PPN!, The Parson Redheads and 1939 Ensemble could not be more appropriately Portland, but each in their very own distinctive ways. With The Parson Redheads you'll get a sweet dose of melodious hippie folk, replete with shakers, harmonica and maybe even some bare feet, plus a pair of authentic gingers to boot. And in archetypal Portland fashion, the PDX via LA band was officially christened earlier this year, appearing on Portlandia as the barber shop quartet during the song "Dream of the 1890s."

Following up that tame and relaxing introduction, 1939 Ensemble will bring their percussive brand of experimental jams. Rhythmically captivating, watch as Jose Medeles and David Coniglio take turns pounding on drums and vibraphones, accompanied by electronic chatter, as they rock out on jazzy, instrumental, krautrock cuts from their debut Howl & Bite:

Representing PRTLND hip-hop on day one will be TxE, which includes the talents of Tope and Epp on vocals and G_Force (aka Calvin Valentine) on beats. The trio released their debut album, We Get It In True, earlier this year, and check out "The First One" below—the first cut from that record.

Both AU and Radiation City have been steadily gathering steam as of late. AU's been building up frenetic sparks with a new record, Both Lights, that features none other than bass saxophonist Colin Stetson on the first single "Solid Gold" adding to Luke Wyland and Dana Valatka's off-center energy. To insert some visual color to AU's dazzling compositions, watch the video for "OJ" by Japanese director Takafumi Tsuchiya.

And Rad City released a new EP just six months after their debut record. With a new band member in Patti King, the spectral and saccharine five-piece played a live set at Music Millennium not too long ago, which OMN caught on film along with some help from Stumptown Bliss. In case you missed it, here it is now:

---
Get the rest of our picks for Saturday and Sunday on OMN.