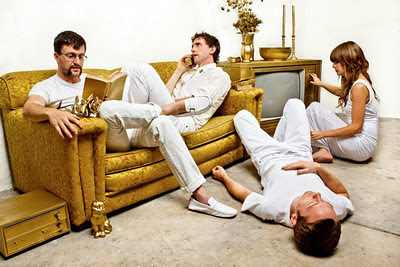 “I’m currently sitting in the woods on a very steep cliff… just noticing some hunters that are walking around about 1,000 feet from me,” said Matt Sheehy over the phone on a gray Tuesday afternoon. ”I spend a lot of time in the woods because I’m a forester, and it’s hard for me to put a finger on how exactly me spending this amount of time in nature affects the recording. But what it comes down to is the sense of wonder that I get from looking up at the stars or hanging out at a planetarium or studying trees or looking at the eccentricities of plants–that’s one of my favorite types of feelings. I try as hard as I can to recreate that [feeling] in the work I do in music and art.”

Sheehy’s latest musical endeavor, Lost Lander, reflects his amazement. Crafting an auditory world of wonder, Lost Lander’s delicately elaborate tunes teeter on organic surrealism like the natural marvels that awe and inspire whether it’s the brilliance of aurora borealis, the intricate beauty of ice crystals, the perfect rings of Saturn, or even the glow of a lightning bug.

“It’s that feeling that you get when you discover that there’s a whole other universe that you didn’t even know about and how it makes you feel kinda small,” continues Sheehy. ”Sean Flinn calls it ‘the big small,’ where you realize how big you are and how small you are at the exact same moment. It’s trying to capture that. I try to spend as much time as I can in that headspace.”

And thankfully, now you can too with the release of Lost Lander’s debut album DRRT. The wondrousness that surrounds us all and influences Sheehy now has a somewhat tangible form and a release date: January 24th, 2012.

The album’s title digs even deeper into depths of Sheehy’s artistic process. Stylized as leetspeak-esque spelling of “dirt,” the name is both organic and technological at the same time, a theme relevant to record’s creation. Teamed up with producer Brent Knopf (Ramona Falls, ex-Menomena), the duo recorded separately and together at the Oregon Coast and in the rainforests of the Olympic Peninsula, amongst other locales, before inviting a bevy of Portland musicians to provide support.