from dirty mittens to artifice : a band in transformation 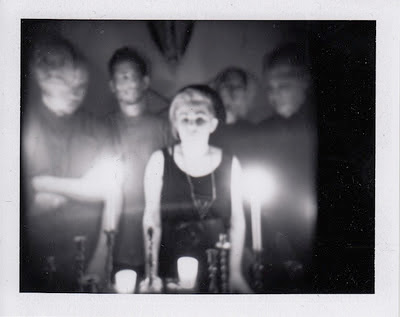 OMN has fondly followed Portland's Dirty Mittens over the last few years, whether they've been playing Rigsketball or coveted stages at MFNW (two years in a row) or the Mississippi Street Fair.  We rejoiced when the quintet finally released their debut album, Heart of Town, this past summer after many years in the making and set out in October to tour behind the 12 tracks of indie-pop perfection they had definitively committed to record.

And now, just a handful of weeks later it seems that the band as we know it has conclusively come to an end.  Sad as it may be, the good news is many of the Mittens will be continuing under a new name: Artifice.

It's been a long time coming. They're really excited to be moving in a more electronic, sample-driven direction and I'm not really into all that stuff. On our last tour, for example, everyone was programming beats on their laptops in the van, and I was left strumming an acoustic guitar and writing sad bastard songs. There's always a certain melancholy to any ending, and certainly this is no exception. Sharing sweaty rooms, stinky vans, and cramped stages with those folks has been one of the best experiences of my life. But it's definitely time to move on.

I know they're going to sound fantastic, and I'm stoked to be able to go to shows as a fan and dance my ass off and not worry about playing guitar!

So, what will Artifice sound like?  Their Facebook profile doesn't offer much but it does simply proclaim: DARKDANCE.

Another Facebook note from Chelsea Morrisey describes the sound a bit more:

If Dirty Mittens was the Talking Heads meet Booker T and The MGs at Col Summers Park in summer 2002, Artifice is Portishead braving the '79 Berlin winter to meet ESG at a warehouse party DJed by New Order. It is drum heavy, there are electronic and synthesized elements, but this will take nothing away from the energy and spectacle that we will bring with our live show. The show will be a different kind of animal.

Before the above message was published, OMN conducted the following interview with Chelsea Morrisey via email on the break up and plans for the new act.

How would you describe the sound of Artifice? Will it be taking a different direction than the Dirty Mittens?

I imagine that people will be shocked to know that the same group behind the sunny, indie pop of Dirty Mittens are behind Artifice. Artifice is heavy, almost moody, and much less reliant on traditional approaches to band performance and songwriting. Our goal is to create danceable music with a focus on textures and soundscapes rather than a typical four-on-the-floor format. Similar to Dirty Mittens, we will hold our live performance to a very high standard.

Okay, so what happened with Dirty Mittens?  Why are you guys "disbanding"?

I wish I could give you one of those really interesting and dramatic break up stories, but the truth is that we just really felt like we needed to hit reset. We loved Dirty Mittens and we will always have nostalgia for the project, but we have grown up so much as people and more importantly as musicians and songwriters. Over the last year we've incorporated more and more computer-based approaches to songwriting, which have altered our sound in such a way that we really felt like our new material was a different band.

[There are] no personal problems whatsoever. I have viewed the band as family and have actually spent more time with these guys than my biological family in the last five years. I wouldn't take a day of that back.