q/a : where has the blow been? 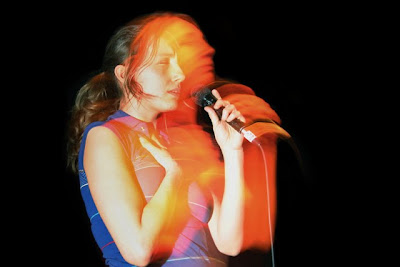 A gig by The Blow is never just a musical endeavor. Rather, the show’s of Khaela Maricich blur the line between concert and monologue. From irresistible, lo-fi, laptop dance-pop to laugh out loud or awkward encounters, she is a true performing artist; one who can control the stage with no more than a mic and a MacBook.

So what happens when she adds a visual partner to the mix?

In the past we saw how a musical partner in Jona Bechtolt (YACHT) propelled The Blow to new heights, and now The Blow is collaborating in a visual manner with installation and conceptual artist Melissa Dyne who will be “working with lighting and sound to manipulate the environment and to kind of play with the possibilities of whatever space we are performing in,” says Maricich.

That means a unique experience in every venue, every night. As her on stage narrative develops so will the visuals; at least that’s what we’re led to believe. But we honestly won’t know until we get the chance to see The Blow in concert. And Portland will finally have the opportunity to do so when The Blow returns home for the first time in more than two and half years performing the Doug Fir on Wednesday, February 2nd, 2011.

By keeping a low profile online, The Blow has only allowed access to her new material at her live gigs, and as the girl of NW origins but residing in NYC since 2008 gives OMN the run around, she’s enjoying the “chaos” of a city of 7 million, being inspired by Joan Rivers, Tina Fey and Beyoncé, and “getting pregnant” (?!), yet still misses a Portland full of friends, Powell’s, river swimming, and The Asian Reporter.

You’ve been working with Melissa Dyne, what’s her role?

Melissa Dyne is an installation and conceptual artist, and she is collaborating with The Blow. We are working together on the live performance; she is treating the venue each night as one would treat an installation, working with lighting and sound to manipulate the environment and to kind of play with the possibilities of whatever space we are performing in. We have been touring a fair amount this past year, so there has been time for our collaboration to grow and develop over time, and as we keep touring, it keeps growing. We’re also working on other elements of the greater performance project together...