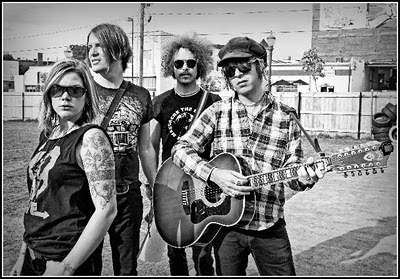 After more than 15 steady years in the music biz, it may seem like The Dandy Warhols have been pushed by the wayside of the fickle frontal lobe of our pop-culture memories. It’s been a decade since their biggest and most commercially successful hits, plucked from the highly publicized, most accessible, critically lauded, and ubiquitously heard worldwide (due to use of “Bohemian Like You” in major TV commercials at home and abroad) third album, Thirteen Tales From Urban Bohemia.

Propelled to the forefront, The Dandys have not held the same high profile over the years, but, nevertheless, they’ve maintained and lost little of what they initially worked so hard to gain. The band has been dependably releasing music (new and old) under their own imprint Beat The World Records and recording themselves and friends in their home studio, The Odditorium, which occupies a quarter of a city block in NW Portland. A private club of sorts, The Dandys are known to not just rehearse in the space but also throw parties and host bands that come through town.

The Dandy Warhols have been a staple of Portland’s indie rock scene since the early ’90s frequently filling the stages of small rock clubs like Slabtown and the now gone-for-good Satyricon, where lead singer Courtney Taylor-Taylor performed his first show at age 14. And The Dandys’ guitarist Peter Holmström too played his first gig there as a member of a goth act. Who was in the audience? Only Taylor-Taylor.

After saying farewell to Satyricon in October by reuniting with original drummer Eric Hedford for a one-off gig, The Dandys are back for their annual Christmas show on Sunday, December 12th at the Crystal Ballroom (with Blue Giant opening) in the midst of a national tour hyping their latest release, a greatest hits compilation of sorts that highlights the singles from their Capitol Years plus adds one new cut, “This Is The Tide.”

Even though The Dandys’ last PDX show saw them performing only material from their first two albums (and before) and even incorporated only vintage gear (all the gear on stage was from their early days) and garb (like Taylor-Taylor in his worse-for-wear, red Enjoy Weed tee and Holmström in the jean jacket from the cover of Thirteen Tales From Urban Bohemia), this time around fans can expect a much more “greatest hits” approach and something “a little bit looser,” says drummer Brent DeBoer, compared to the rest of the stops on their current tour.

One quick listen to The Capitol Years 1995-2007 proves why The Dandys have been able to stay around; the mid-90s static-y, swirling, psychedelic haze that they helped make popular has sticking power. The only reason why you’ve maybe heard less of their distorted fuzz recently is because they did what every anti-establishment band wants to do: They dropped their label. And without the direction of a major resource like Capitol Records The Dandys have struggled navigating the modern music world. Even if record labels themselves have hit hard times, they still staff professionals who have networks and whose job it is to get a band’s music in the hands of as many people as possible. Thus, as The Dandys work on their seventh “official” studio album–”We’re recording every day that we’re not on tour,” says DeBoer–they’re also thinking about how to get it into your hands.

So, even as rock stars struggle with a changing music industry, The Dandy Warhols’ drummer Brent DeBoer, who recently moved to Melbourne but is back stateside for the tour, took some time out to dispel any myths that remain about The Dandys and The Brian Jonestown Massacre being nemeses. DeBoer simply wants to clarify that “I wish that people knew that Courtney doesn’t only talk about the music business and Anton doesn’t only kick people.”