road journal : q/a with nick jaina before his homecoming 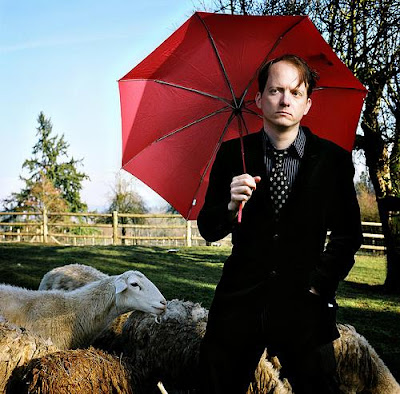 The Nick Jaina Band is Nick Jaina, but really, it’s never just Nick Jaina. Constantly surrounded by shifting cast of characters, the real constant in the rotating and evolving band is the incredibly tuneful, namesake bandleader. Jaina has a penchant for alt-folk melodies that pop enough to stick in your subconscious and a knack for also evoking a heartfelt, emotional response from the same song.

With seven albums under his belt, the songwriter’s band has featured members of Loch Lomond, Laura Gibson, Jolie Holland and Y La Bamba (including friend Sean Flinn), and his latest release A Bird In The Opera House, which came out on April 13th, 2010, included the 2010 PDX Pop Now! compilation track and first album single “Sleep, Child.”

Jaina’s already been around the Western US and home (like at City Hall) with his newest, but since the beginning of October, Jaina and Co. have been enjoying the freedom of the wide open road while Jaina himself has been thinking about his next projects, including a ballet and a “new album featuring ten great women singers,” even if feeling a bit like Marty McFly at times.

Who is in the band on this tour?

This tour we’ve had John Whaley (Pancake Breakfast) on trumpet, Andrew Zilar (Lions & Eagles) on drums, William Joersz (Shoeshine Blue) on upright bass, and Thomas Paul (who plays in an eponymous band) on electric guitar. And then we found Stelth Ulvang from Denver’s Dovekins on the streets of New Orleans, shoeless and holding an accordion, so we asked him to ride with us and learn our songs.

Where have you been?

We’ve gone clockwise around the country. Across the High Plains, up into the Laurentian Upland, down through the Atlantic Seaboard Lowland Section, into the Mississippi Alluvial Plain (try the catfish Po-Boys!) back across the lower High Plains, and we’ll proceed through the agricultural bounty of the former desert known as California.

And what have you seen on this trek?

We played in a prison in Umatilla and every inmate shook my hand after the gig. We saw a harpy eagle at the Boise Birds of Prey refuge. We ran into Poppa Neutrino, the happiest man in the world, and helped him launch his home-made raft into Lake Champlain so that he could begin his two-year circumnavigation of the world. We saw where Flight 93 crashed in Pennsylvania, and toured the U.S. Capitol, where it would’ve crashed if not for the brave people on the plane.