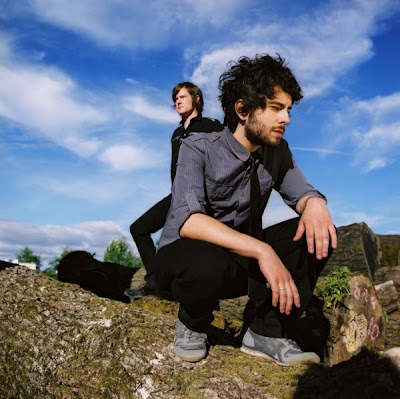 Ian Mackintosh and Ben Braun are in tune with each other. The two finish each other’s sentences and more importantly, each other’s thoughts. Those thoughts often come in the form of sleek, interwoven electro-pop.

“We’ve worked together so much now that we finish each other’s thoughts or we think of it [the same thing] right as they’re saying it,” explains Ben.

“Yeah, we’re in that groove now where we write really well together,” adds Ian.

But being “in that groove” is nothing new. The Portland duo has been working in this fashion since 2006 when Ben’s father casually passed a tape of Ian’s music on to Ben. “I heard the music and freaked out and got a hold of Ian,” says Ben. “We linked up and pretty much hit it off. We started writing right away.”

Ben moved to Portland from New York around age ten, and Ian was born in LA but “worked my way up the I-5 corridor and wound up in Portland a little after high school.” Now in their late twenties and early thirties, the two have just released their second self-produced and recorded album, but this time around they are signed to a label, the taste-making Chop Shop Records, a division of Atlantic (alongside a new LA to PDX transplant Anya Marina). Pulsating with cool, danceable electronics, Where We Are came out on September 21st and has solidified the band’s synthpop status fronted by opening single “Could It Be.”