q/a : brent amaker + the rodeo is ‘here to kick your ass’ 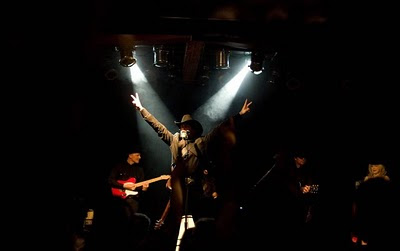 By nature, cowboys are badasses. Look it up in Merriam-Webster. It says: A rugged American dude that rides around on a horse ropin’ cattle, shooting pistols, and a slugging whiskey while wearing leather and a distinctive, wide-brimmed hat that ass kicker. And FREEDOM. Plus there’s a picture of John Wayne.

Now that’s a fact. So what happened to all our country cowboys?

For years, at an increasingly alarming rate, Nashville has been giving us country music about Bud Light, break ups, and tricked out pick ups. Songs are more likely to be about NASCAR than real struggle or strife–unless the salon got your highlights wrong–and freedom comes prepackaged in tacky, flag-waving odes, no longer reflections of “Prison Blues.”

Besides, where’s the excitement? The bravado, decadence, and romance embodied by a real man’s man? Where’s the Wild American West? Well it’s still here, from the wettest, northern stretches of the American West, in the form of Seattle’s Brent Amaker & The Rodeo.

The noir cowboys, forever dressed from head to toe in black, are equal parts Johnny Cash and Sergio Leone along with those dusty gems found on Tarantino soundtracks and a reputation for boisterous, whiskey-infused shows where B.A.R Brigade supporters encourage even more debauchery by emulating the Rodeo’s style. Their live sets often feature burlesque dancer Bunny Monroe or the you-gotta-be-there-to-see-it “Whiskey Baptism.” And Portland will get their chance to experience this live show that is a show, pulling as much from Devo and Bowie as classic country, when Brent Amaker & The Rodeo play the second to last date of their current tour at the Mt. Tabor Theater on Sunday, November 14th.

With cocksure confidence from three years of touring the US and Europe, B.A.R. just released their third album Please Stand By on October 19th, and on this one, Brent Amaker could almost make you believe he’s turned sympathetic, a romantic of sorts on “Garden Of Love,” until he makes you to “Saddle Up” and shut up on “Talk Talk Talk Talk Talk” like a backhand me across the face, proving he’s 100% badass on “Man In Charge” or “Sissy New Age Cowboy” (below), from their 2006 self-titled debut album and the testosterone-titled, pre-album taster Pink EP.

On Please Stand By, Brent Amaker & The Rodeo go from patriot to ring leader to Don Quixote to free wheeler to narcissist in just over 30 minutes all fueled by cheeky, pointed lyrics, but does Brent Amaker care to explain himself? Simply put: “No.”

So then, who is Brent Amaker? Is he a hardass or a softie?

Hardass, unless I’m dealing with a lady. Dudes can suck it up and handle themselves.