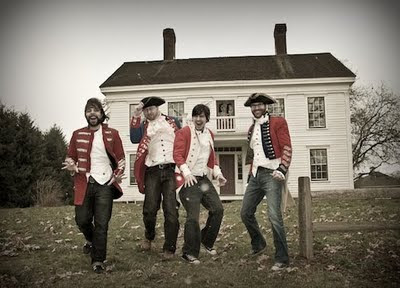 As December rolls in, it's time to cozy up in your neighborhood record store and enjoy warm, acoustic strumming and whimsical, historical narratives.

On their second album, The King Can Drink the Harbor Dry, The Dimes added some instruments and doubled in size while singer/songwriter Johnny Clay began buffing up on his history of Boston.

Inspired by stories of our founding fathers, specifically strong women, he name drops Susan B. Anthony, Abigail Adams, Clara Barton, and Mary Dyer like calling defendants at a witch trial.

With sunny melodies and floating rhythms, I thought they wouldn't be back so soon after their album release party at Mississippi Studios on November 14th. Yet, The Dimes are playing a free acoustic show at Music Millennium on Tuesday, December 1st at 7 PM and also announced a NYE extravaganza at the Mission Theater with Weinland.

So come soak up the stories inside while The Dimes sow the seeds of history.

---
Read this article on The Deli Portland.
Posted by pdxnoise at 09:25