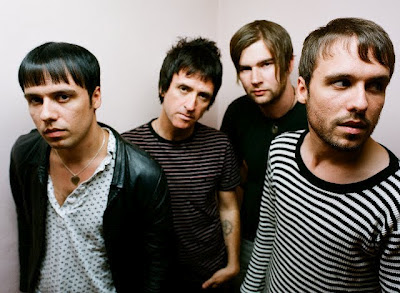 I first heard about The Cribs back in 2005 or so when they were palling around with the Kaiser Chiefs, opening some shows in the UK and on the Chiefs first trip to the US. Little did I know what these indie scenesters were capable of and how close they'd come to home.

Then in 2007, the brothers Jarman* wizened up (but I dare not say grew up) and released the brilliant, breakthrough album Men's Needs, Women's Needs, Whatever, which scored them a #13 spot on the UK charts. This was still before Gary Jarman relocated to our fair Rose City, but about the same time Johnny Marr** (yes, you can close your drooling, gaping mouth now) joined the fraternity.

Now the tunes are still sing-a-long ready tingling with punky rawness and dance rhythms that make good indie rockers smile. And the Portland connection just grew deeper. Recently, The Cribs decided there are only three cities in the world worthy of their Ignore the Ignorant: The Roses Edition. That's right: Portland, Yorkshire and Lancashire, the Jarman’s and Marr’s respective hometowns.

The special edition includes a live disc of The Cribs at The Ritz in Manchester, a DVD documentary of the album’s recording, and The Serpent and the Peach–a silent short mostly filmed on a hand-held camera. Snatch it up at Jackpot Records (where they played a free in store performance last Sunday afternoon)...if they're still around.

Some background for those that don’t know, because I’m not that pretentious. I don’t expect you to know it all.

*The Cribs is comprised of the three Jarman brothers, twins Ryan (guitar, vox) and Gary (bass, vox) and youngin’ Ross on wee-kiddie drums.

**Johnny Marr is the ex-The Smiths guitarist, former member of Electronic with Bernard Sumner (New Order, Joy Division), and possibly in his post-Modest Mouse phase, although he’s yet to openly declare this. Regardless, he’s reveling in his position as part of The Cribs’ “two-headed beast” alongside Ryan on guitar.

---
Read this article on The Deli Portland, and vote for The Cribs in the Band of the Month poll.